Task Coach has just been updated to version 1.3.21 which fixes various bugs. As reminder, Task Coach is a cross-platform to-do list manager written in Python that allows users to organize their tasks and to-do lists in a way that will help them improve their productivity. 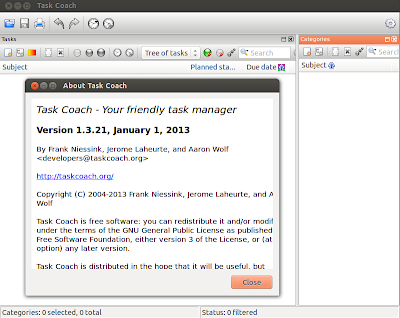 With Task Coach, you can have these features:

There are many features for Task Coach, you can review them in details here. Also, the app is available for some portable devices such as iPhone, iPad, and iPod Touch. Here are some of the bugs that has been fixed in this latest release:

In this tutorial, we will help you install Task Coach via PPA which is available for the following Ubuntu/Linux Mint distributions:

Enter these commands from the terminal:


You can start the app via the Unity Dash or from the terminal with this command:

To uninstall the application from your computer, enter these commands: