Since the introduction of the popular Mac OS X Dock, developers have begun to create similar dock applications compatible with other operating systems (Ubuntu, for example). For Ubuntu, there are many amazing docks for the Gnome desktop such as AWN (Avant Window Navigator), Cairo Dock, Docky, etc. Most users use these docks mainly to decorate their desktop to make it look amazing.

There are many dock applications we have already covered in this blog, but today we will introduce another dock called Plank that was created by the same team that created Docky. What is special in Plank is its lightweight size, simplicity and speed. Another good feature for Plank is the autohide feature that is enabled once you pass a window over it. The only drawback with Plank is the lack of a GUI that allows us to configure it like changing themes, icon size, dock position on the screen, and so on. But, you can do this manually as described below.

You can install Plank on Ubuntu 12.04/11.10 or older with the following commands:

You can now start Plank from the Unity Dash. Once started, you can either pin programs shortcuts by dragging its launcher from the Unity dash into the dock, or open the program and right-click its icon on the Plank dock and select "Keep in Dock":

Using a different themes for Plank is a bit complicated, but here is how to change the default Plank theme:

- Make a backup copy of your default theme so that you can restore it later. This can be done as follows:

- If you want to restore the default theme, you can run now these commands:

To adjust icon size, disable the autohide feature, change dock position, etc. you can edit the settings file with this command: 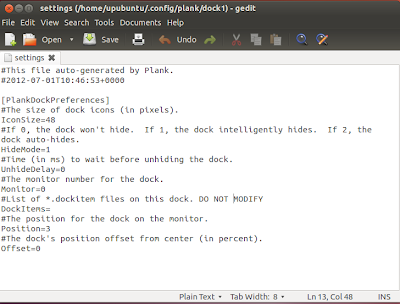 For the dock position, the default value is 3, but here are some other options:

After you finisih your modifications, save your file and exit, then restart Plank.