In this tutorial we will see how to add a "Force Quit" icon to the Unity launcher of Ubuntu 11.10/12.04 that allows to force kill any unresponsive application or window. After clicking this icon in your launcher, click any window to force close it. To make the installation simple, I have created the .desktop file and uploaded it to my Dropbox account. 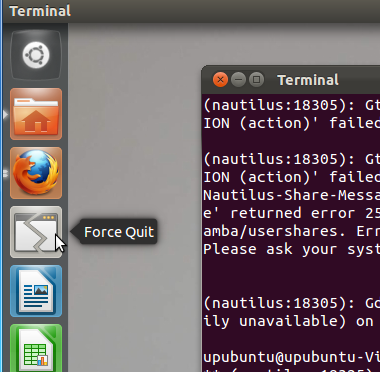 Open the terminal (Ctrl+Alt+T) and run the following commands to download and add the "Force Quit" .desktop file to your system:

Now you have two options for adding the "Force Quit" icon to the Unity launcher:

Via the terminal, run this command:

Then Drag and drop the Force_Quit.desktop file into the launcher:

Search the Unity Dash for "force quit" and drag and drop  Force_Quit.desktop in the Unity launcher:

You can now use this button to force kill any unresponsive window.