How To Mount A Hard Disk Automatically At Ubuntu Startup

If you have an extra hard disk whose filesystem is not compatible with that of Ubuntu, then it will not mount automatically at system startup. It will be arduous using software to manually mount hard disks under Ubuntu and a good solution is to mount them automatically at startup using the instructions given below.

1. Open the terminal and crate a folder for your hard disk under the /media location with the following command:

Rename myfolder to whatever you want.

2. You have to know now the name of the target hard drive (/dev/sda2, /dev/sda3, etc.). You can use GParted or simply run one of these commands from the terminal:


3. Edit now the /etc/fstab file with this command:

At the end of the file, add this line:

Replace /dev/sda3 with your own HDD name and replace also myfolder with the one already created. 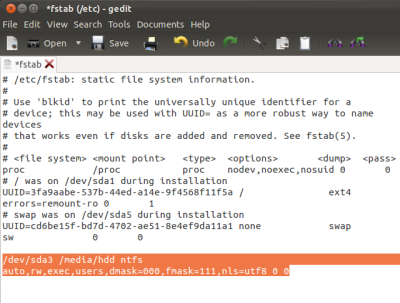 Press Ctrl+Q and save your file.

4. Run now this command to verify if the hard drive is well mounted: