Skype is a Voip (proprietary voice over Internet Protocol) service and application that allows users to communicate between each other over the internet in both audio and video as well as making phone calls, sending instant messages, transferring files, etc.

In the Linux world, big companies seem not giving much importance to improving their application software as in Windows. If we take Skype for Linux as example, you will notice that it lacks many features and the user interface is not that attractive compared to the Windows version.

Fortunately, there is a tool named SkypeTab-NG which allows to use tabs within the Skype interface. This means you can start multiple conversations in different tabs in one window. You can send messages to a friend, give a phone call to another, etc. 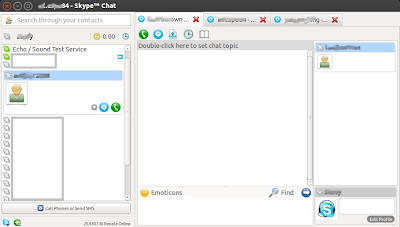 To install SkypeTab-NG on Ubuntu 11.10 or any older version, run the following commands from the terminal:

You can then start SkypeTab via the Unity Dash.