Home » System » How To Control Multiple Computers With One Keyboard and Mouse On Ubuntu 11.04

How To Control Multiple Computers With One Keyboard and Mouse On Ubuntu 11.04

If you have more than one computer running under Ubuntu or any other Debian-based distro, you can easily control them with a single keyboard and mouse by using Synergy, which will help you share your mouse and keyboard between multiple computers.

The configuration of Synergy is quite complicated, but you can instead use QuickSynergy, which is a very simple interface for configuring Synergy. The tutorial will show you how to control another computer running under Ubuntu 11.04/10.10/10.04.


In the server computer (Ubuntu 11.04) you want to use the keyboard and mouse to control other computers, launch the Terminal and issue this command: 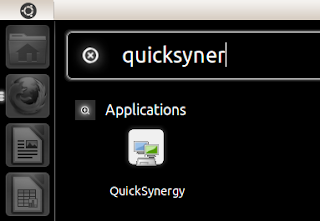 Under the Share tab, enter names of computers you want to control in the following fields: 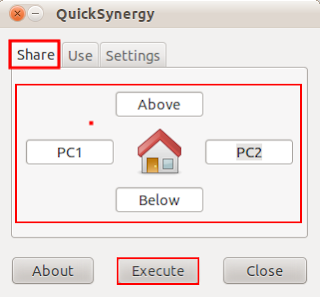 Client Setup and Configuration
In the client computer (Ubuntu11.04/10.10/10.04), install also QuickSynergy with this command:

Launch QuickSynergy in the client computer and under the Use tab, submit the server hostname/IP address, screen name you entered in the server computer (for my case: PC1), then hit Execute. 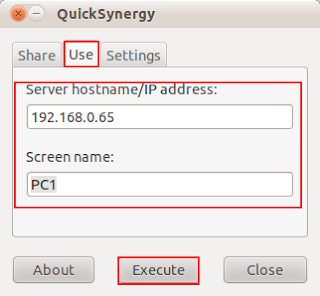 You can now control the other computer with your own keyboard and mouse from the server computer. To switch between screens, move your mouse cursor off the edge of the screen (Left/Right/Above/Below).